Religious ties are a major cause of conflict.

For example, while the leadership in the People’s Republic of China has hardly any institutional ties to religions, almost all presidents in the USA are religious. This results in conflicts of interest that can have different meanings depending on the religious affiliation.

A look at past presidents’ religious affiliations shows a broad mix of different Christian denominations. 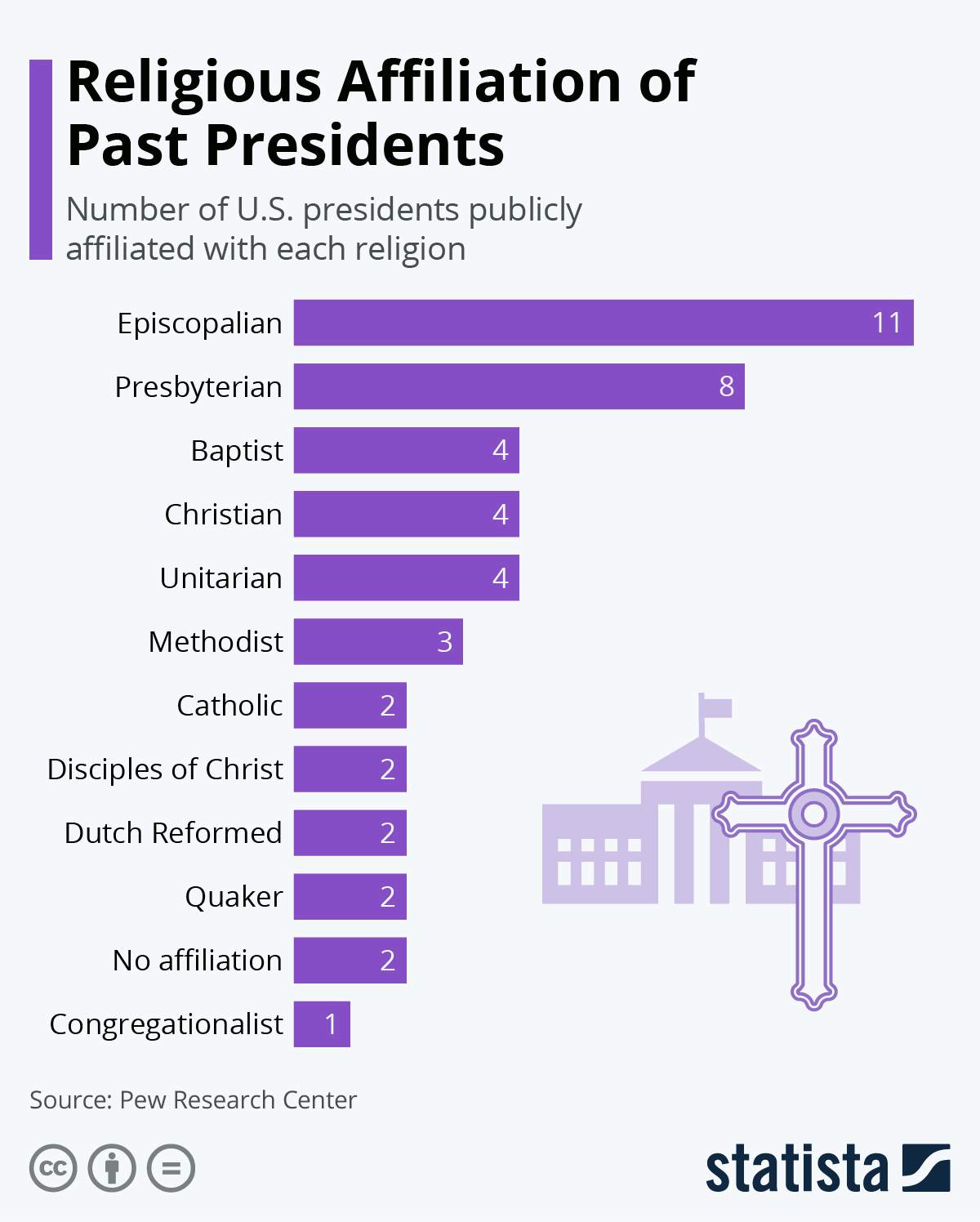 You will find more infographics at Statista.

With Joe Biden’s inauguration as the 46th president of the United States, he becomes just the second Catholic ever to hold the highest office in the land – joining John F. Kennedy. The Catholic Church, sometimes referred to as the Roman Catholic Church, is the largest Christian church, with approximately 1.3 billion baptised Catholics worldwide as of 2018. Hence the question arises whether the Pope will have greater influence under the new administration.

International agreements are important that foster mutual trust and enable the Catholic Church to cooperate more effectively in the spiritual and social well-being of countries. In this regard, On 22 October 2020, the Holy See and the People’s Republic of China agreed to extend for another two years the Provisional Agreement regarding the Appointment of Bishops in China, signed in Beijing in 2018. The agreement is essentially pastoral in nature, and the Holy See expressed his confidence that the process can be pursued in a spirit of mutual respect and trust, and thus further contribute to the resolution of questions of common interest.

According to data collected by the Pew Research Center, among past presidents, the Episcopal Church has had the most members hold the office of president over the past 232 years. The Episcopal Church (TEC) is a member church of the worldwide Anglican Communion and is based in the United States with additional dioceses elsewhere. Starting with George Washington, there have been 11 Episcopalian presidents out of the 46 that have held office, with other notable Episcopal presidents being James Madison, Franklin D. Roosevelt and George H.W. Bush. TEC has its origins in the Church of England in the American colonies, and it stresses continuity with the early universal Western Church and claims to maintain apostolic succession (though the Catholic and Orthodox churches do not recognize this claim).

Presbyterians are the next most common with 8 presidents, notably Andrew Jackson, Woodrow Wilson and Ronald Reagan. Presbyterianism is a part of the Reformed tradition within Protestantism, which traces its origins to Great Britain, specifically Scotland. Baptists, Unitarians and general Christians were tied with four apiece, with other smaller denominations rounding out the religious tree.

Dr. Oliver Everling has been independent since 1998 and is Managing Director of RATING EVIDENCE GmbH. As visiting professor of Capital University of Economics and Business in Beijing, former chairman of the supervisory board of a rating agency, advisory board member, advisor, member of rating committees, chairman of ISO-TC Rating Services, author or publisher of books and a magazine, Independent Non-Executive Director under EU Regulation on Credit Rating Agencies, he has been or is involved in ratings from a variety of perspectives. Previously, he was for 6 years department director at Dresdner Bank and, until 1993, managing director of the Projektgesellschaft Rating mbH after a doctorate at the banking and stock exchange seminar of the University of Cologne.